I am Panel Astrologer at www.astrosage.com. There are talks with many people every day and sometimes very funny stories also happen. Similarly, once a questioner asked, tell me what is the question in my mind, then I said that astrology is not for testing, it is completely forbidden to test any knowledge with the intention of making fun of it.

There are exceptions to the laws of physics as well, but it is forbidden in all the predictive sciences because you want to know about the future and astrologer is not giving the answer, astrology is giving you the answer - an astrologer can be wrong or right. but astrology is not.

Still, I told him that okay give me any number between 1 to 249 and he gave the number 16. While talking to him, I felt that he has called me before and is a heartbroken hotel. I saw the horoscope which is given below.

Till now I had remembered who he was, but I could not say anything apart from what the horoscope would say.

I started looking at the horoscope - 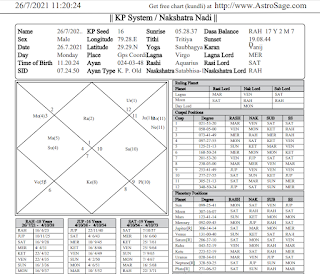 Moon was the lord of the fourth house and was in the constellation and sub-nakshatra of Rahu. Rahu was in the Taurus sign of Venus. Venus was casting full vision on the Moon. Venus was in the fifth house.

It was clearly a matter of love and I told him that you have a question about a girl, then he said that you may have remembered who I am, so I may have said, but I have told you what is in the horoscope. - Any KP astrologer can clearly say from this horoscope what is the question.

That's why the Krishnamurti method is the most accurate because only it can give you the correct answer.

Email ThisBlogThis!Share to TwitterShare to FacebookShare to Pinterest
Labels: how to read horary chart, KP horary astrology, question in the mind, what am i thinking
Older Posts Home
Subscribe to: Posts (Atom)