Priyanka Gandhi Vadra and the upcoming elections of states and country

In this horoscope, I have used a chart with the date of birth same as everywhere but the time of birth is 14:10. The reason being this horoscope matches with the face as the ascendant is Taurus. 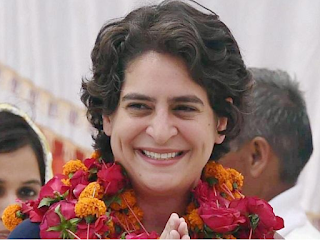 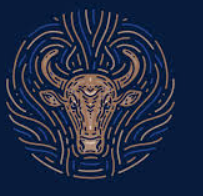 The second reason is that twice in the period from February till date I took the ruling planets and Venus came very prominent in both the time charts. Hence Taurus can't be ruled out.
After confirming the ascendant, Let us see what her horoscope is telling about her actions in the battlefield of coming elections in the states of Uttar Pradesh, Uttarakhand, and the coming main election of look sabha 2024. how is she going to make a mark for herself and also for the congress party? Read in Hindi click here 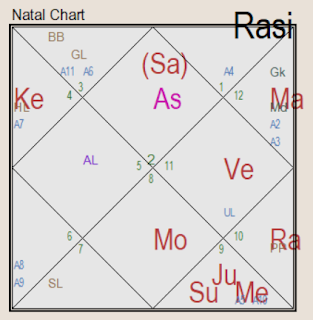 This is the horoscope of Mrs. Priyanka Gandhi Vadra.
She is not running the main period of Venus till 2026 which means the Lok Sabha elections will be held in this mahadasha of venus itself. Venus is in the star of Mars and in the sub of mercury. Mercury is in the 8th house. hence there will be many obstacles but due to the Martian energy, she will be doing many things till 2026. That is for sure that she is going to create problems for all the other parties which ever they may be in the state and national elections.
The Antara dasha which Mrs. Priyanka Gandhi Vadra is going through now is of  Saturn till March 2022 and then the Antara of mercury will commence which will be there till January 2025.
Saturn and Mercury are going to decide how things will be for her and her party as she seems to be in control as for now for the congress party. Mrs. Priyanka Gandhi Vadra has Saturn in the 12th house in the cusp chart. it is in the star of the sun and in the sub of the planet mercury. Mercury is in the 8th house and is ruling the cusps 2-3-6 in the horoscope of Mrs. Priyanka Gandhi Vadra.
UTTAR PRADESH ELECTIONS AND UTTARAKHAND ELECTIONS 2022
It is said that Mrs. Priyanka Gandhi Vadra is in command of Uttar Pradesh by the media, and she is not at all interested in Uttarakhand, which is obvious by her activities. Most of the time she is giving to Uttar Pradesh as it has now become an ego matter for both the congress and the BJP. She has Saturn afflicting the ascendant although the planet has moved to the 12th house there is an aspect of Saturn on the natal mon which is causing punarphoo. It seems that Mrs. Priyanka Gandhi Vadra has a somewhat depression-prone attitude in her lonely times and in family life which obviously she cannot demonstrate to the masses and the workers of the Congress party.
The ascendant lord in the 10th house is an asset of her horoscope and also the 10th lord Saturn is connected with the Lagna, but it is not in its entirety. Her 10th cusp sub lord is Venus which is in the star of Mars placed in the 11th house which is another feather of her horoscope.
But when we come to the sub lord of Venus it is Mercury and it is in the 8th house. unfortunately, Mrs. Priyanka Gandhi Vadra will be making many efforts to er awaken the diminishing Congress party in Uttar Pradesh but it will look very good on the surface but in reality, she will be mostly wasting her energy as the final outcome will not be very good for her.
Astrologically Mrs. Priyanka Gandhi Vadra should wear a very fine quality Yellow sapphire gemstone on her index finger on a Thursday morning in Gold. I am sure that would not be a problem for her in any case. This she should wear for the rest of her life and keep changing the stone every 4 to 5 years.
Since there is a strong connection between the 8th house in the mahadasha lord and the current Antara lord which will be there till March 2022, if the elections are held before the 8th of March then she will not be able to do much about a turnaround in the party results.
Then Mercury will begin which rules the cusps 2-3-6 and mercury in her chart is in ketu star and Rahu sub and this will be the time when her party can do much better for sure.
LOK SABHA ELECTIONS INDIA 2024: HOW WILL Mrs. Priyanka Gandhi Vadra PERFORM
At that time the period which she will be passing through will be Venus dasha and Mercury Antara. About that, I will be predicting at that time only as there is no point in giving predictions so soon as I am hoping that India is going to see something major happening in the coming 2 years.
Best wishes to Mrs. Priyanka Gandhi Vadra and the congress party.
#priyankagandhi #priyankagandhivadra #inc #congressparty #indiannationalcongress #upelections2022 #loksabhaelections2024

A friend was stuck in the floods of Uttarakhand which started on 18th October 2021. The rains took a mammoth shape and due to heavy rains, the was electricity cut off completely. He was in the dark for three days along with the others in the flood-hit area.

He called me from his phone which was also about to die and asked when will the power come as they were in the dark and after the sun goes down the only source of light they had was candles.

I took the time chart of that time and started looking at the ruling planets, there was a lot of work going on by the government people and the locals had also started protesting in the office of the SDM of the place due to which the SDM said he will get the electricity from other distinct so the SDRF team started their work.

The ruling planets were:

The horoscope is attached. 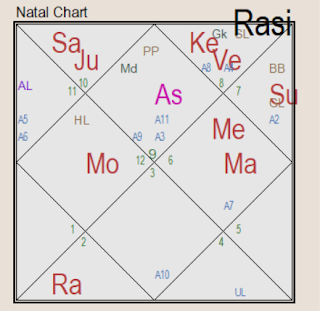 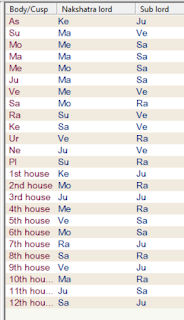 I had tried to find out when the light will come many times but it was never correct and there was an error every time. But I read the book of sahasne Ji which is my bible for KP and I found a rule there this time.

The rule was for events that will take place in a week and the light was about to come in a week only and not beyond that.

In the ruling planets, there was ketu on the top and in KP nodes are given more importance. Ketu is conjoined Venus which rules Friday. I took the horoscope on Wednesday and told him that the power will come on Friday only and he will have to wait for 2 days but he said the SDRF team is joining the power line from the district and the light will be there on Thursday, so I said let us see

He called in Thursday evening with his leftover phone battery that the SDRF team could not join the wires till evening and they have stopped working for the day as the flow was still high in the river.

On Friday afternoon he reported that power was reinstated.

The rule of KP proved correct again, that was 22nd October when the power came. Nodes are stronger than planets- again proved and my prediction came true again by the grace of late Suresh Sahasne Ji`s book.

reiki books in English buy from this link

India Pakistan Match who will win
On 24th October t-20 math will take place between India and Pakistan, Me as astrologer was curious to know as per KP system who is going to win so I took a number from www.random.org and casted the horoscope at the site of www.astrosage.com on their horary astrology page www.gpshorary.com which I have been using since many years now.
The kp seed was 188 and below is the horoscope: 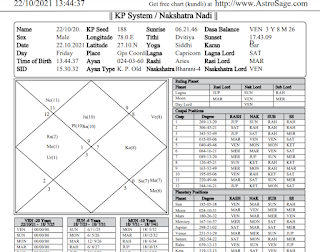