Today the dates for election in New Delhi have been declared. The main contestants are AAP, BJP, INC and funnily they are true not only alphabetically but also real position-wise too in New Delhi.

Let us talk a bit about all the three parties and my this “talk” is simply based on media news reports and my views are not at all personal.


So, to begin with, AAP now seems to be doing a lot for the common man or the aam aadmi and they have been very successful in implementing many of their election promises as told in their facebook posts and in the news adverts. So I will say that they are working and now when I see the media and people talk on social engagements I hear a positive word about this party AAP.


Coming to the second party which is the BJP which has already lost 6 states just for the fact that they do not have charismatic leaders like once congress used to have and they are not a two-man party and the irony is even in the gram panchayat elections their so-called “leaders” are using the things done by the centre for the broader masses and the local issues are completely neglected. What is the use of the name of PM in a gram panchayat election? Their minuscule to larger leaders are drowned in what Philip Kotler described in his bok 4 p`s of marketing which is called “marketing myopia” or one can assume easily it as the pure ego of the third grade and nothing else, this opinion I have made by seeing their leaders on TV, facebook posts, arrogant voices and filled with false ego. And there is no third name in the entire BJP from Kashmir to Kanyakumari except the popular duo.  And they wish to win New Delhi election just for the fact that there are many bhaiyya`s in New Delhi.


Coming to INC, It is a fact Mrs Sheila Dixit did a lot for Delhi and had she not been the CM Delhi would have collapsed long back. Her efforts were real and for the masses but she became prey to AAP wave and anti-incumbency. Otherwise even now when I talk to Delhi people every one praises Late. Sheila Dixit Ji. There is no face in congress either and they are on the same road as BJP putting RSP that is Rahul Soniya Priyanka on their head everywhere.


This is my gathering from news clippings and media stories and social media posts which may or may not be correct and I have no interest in who will become the CM of Delhi other than the fact that this is an astrological topic too so I am giving my prediction for the same. 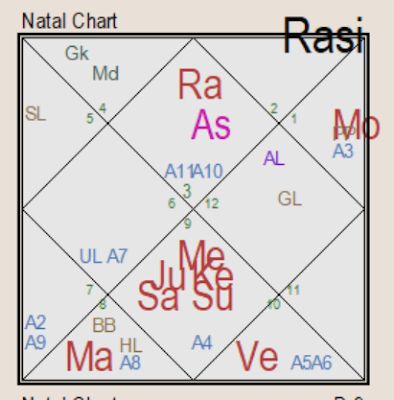 I am using a different kind of system here which used to predict the win of Kejriwal over Sheila Dixit way back in 2013 or 14 I don’t remember. The ruling planets as per the horoscope are, I am taking the Lagna star lord too,
Ls: Jupiter = 21


The total is 57. Because I have added 9 more as Rahu is present in the Lagna and since it is in Gemini it will be given 9 points.


At no.1 the political party is AAP so AAP is going to win the election in February 2020. Best of luck to all parties.